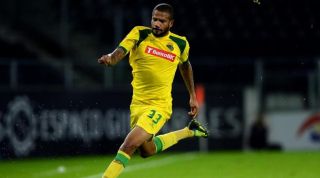 Bebe was signed by former Old Trafford boss Alex Ferguson from Vitoria Guimaraes for an estimated £7m in 2010.

However, Ferguson admitted he had never seen the winger play and Bebe subsequently managed just seven appearances in four years at the club - the last three of which were all spent out on loan.

After unsuccessful spells with Besiktas and Rio Ave, the 24-year-old finally proved his talents with an impressive campaign at Pacos de Ferreira last season, scoring 13 goals in all competitions for the Primeira Liga strugglers.

A number of eye-catching goals and performances resulted in some calls for Bebe to be involved in Portugal's World Cup squad, though he was not selected by Paulo Bento.

He struck in the second leg of Pacos' relegation play-off with Desportivo Aves helped preserve their top-flight status, and his fine showings have earned him a move to the defending Portuguese champions.

Benfica's title triumph last term was their 33rd and Bebe is confident he can help them add to that tally during his time at the Estadio da Luz.

"I am very happy to sign with Benfica," said the winger. "I have wanted to play for Benfica for some time.

"Benfica are a great club.

"Now I hope to improve with him [Jorge Jesus] and help Benfica to win titles."

United also confirmed they will collect half of any fee Benfica receive in the future for Bebe.