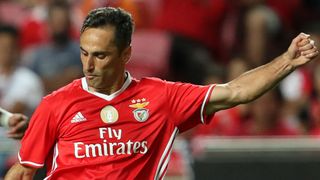 Rui Vitoria's men came into Saturday's penultimate match of the season five points clear of closest rivals Porto, who do not play until Sunday, knowing a win would see them crowned champions again and reach four in a row for the first time in their history.

Benfica wasted no time in making sure of title glory, racing into a four-goal half-time lead courtesy of Franco Cervi, Raul Jimenez, Pizzi and Jonas.

Jonas then added a second-half penalty amid a party atmosphere at Estadio da Luz.

Portugal's most successful team have reasserted themselves as the dominant domestic force in recent years after Porto won 20 of the 29 titles between 1985 and 2013.

Benfica had seen their run of consecutive championship victories ended at three on five previous occasions, but they finally made it to four by lifting the trophy for the 36th time courtesy of the Vitoria victory.

Top goalscorer Kostas Mitroglou, strike partner Jonas and creative midfielder Pizzi have been crucial contributors going forward this season, while a defence including in-demand duo Nelson Semedo and Victor Lindelof as well as veteran Luisao has only leaked 16 goals in 33 games.

Benfica have only lost twice and this win ensures they have gone through the whole campaign without suffering a home defeat.

They will have a chance to make it a domestic double when they take on Vitoria again in the Taca de Portugal final on May 28.