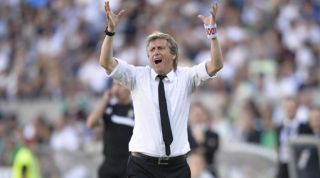 Primeira Liga champions Benfica have confirmed head coach Jorge Jesus will not have his contract renewed.

The 60-year-old has won three league titles and five league cups with the club since arriving in 2009, but the two parties have ended negotiations for an extension to his current deal, which expires this month.

In a statement to the Portuguese Securities Market Commission, Benfica confirmed that talks were now "closed regarding a possible renewal of the contract that end on June 30 2015".

The announcement added: "As a result, Benfica have begun preliminary talks on the potential candidates to replace the head coach."

Benfica's announcement comes after reports in Portugal linked Jesus with a move to city rivals Sporting Lisbon, a club he played for earlier in his career.

While nothing official has been announced between Sporting and Jesus, the club did confirm on Thursday that current coach Marco Silva has had his contract terminated.