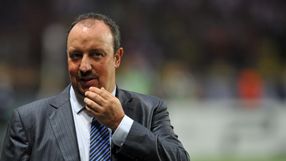 The Spurs wideman ran the European champions ragged in the Champions League on Tuesday, sending shockwaves across Europe, having also netted a hat-trick at the San Siro two weeks earlier.

But while the 21-year-old is being tipped by many as ‘the best player in the world’, Benitez preferred to compare the Wales international to a sports car.

“A Volvo cannot beat a Ferrari in spirit. We played many times against Bale and we know that he is fast and difficult to mark," he said.

“If you have a Ferrari and I have a Volvo, you will beat me in a sprint. A Volvo is a good car because it is our sponsor, but a Ferrari is faster.”

Benitez has been criticised by the Italian press for allowing Maicon to be over-exposed to Bale, but the former Liverpool boss was quick to defend his formation.

“It’s not a question of help from the wide players,” he said. “I am happy with them. They always have a defensive mentality.”

The 50-year-old also responded to comments from the club’s owner Massimo Moratti that Inter needed to ‘step back and look at what’s going wrong’.

“Who should step back, the injured players?” Benitez joked.

“There is a continuous dialogue with the president. It's a strange situation for me. We are all agreed from the fans to the coach that we have not done well and need to improve.”

Benitez is beginning to make a name for himself with bizarre analogies in press conferences.

Last month, Liverpool boss Roy Hodgson took a pop at the £20 million Benitez spent on Alberto Aquilani, but the Spaniard retorted, claiming that Hodgson was “talking about things that he doesn’t know,” before saying: “Some people cannot see a priest on a mountain of sugar.”

That followed another unusual turn of phrase after Benitez was asked about his departure from Anfield: “We have a saying in Spanish, which is: 'White liquid in a bottle has to be milk.’"