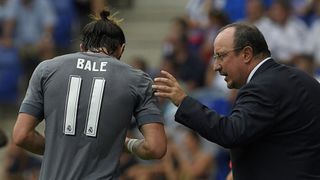 Bale enjoyed a close relationship with Benitez following the latter's arrival at the Bernabeu ahead of the 2015-16 campaign and the 55-year-old's exit has reportedly unsettled the Wales international, with United believed to be keeping a close eye on his situation.

Nevertheless, Toshack is adamant Benitez's departure will not influence Bale's situation in the Spanish capital.

Madrid opted to part company with Benitez following Sunday's 2-2 draw with Valencia, replacing him with Zinedine Zidane, and Toshack feels the ex-Napoli coach always faced an uphill task to succeed at the Bernabeu.

"Benitez was up against it right from the off," he added.

"Right from the minute he walked through the door something was not quite right. I don't think his face fitted.

"I think he'll be looking to take a bit of a rest season, probably until the end of this season and maybe look at something next pre-season."