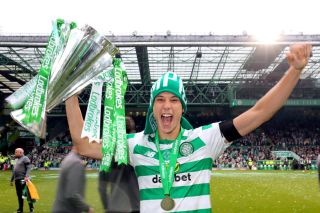 Croatia Under-21s’ Filip Benkovic insists James Maddison is destined for the top despite the Leicester star’s struggles at Euro 2019.

Defender Benkovic believes his Foxes team-mate – linked with a £60million move to Manchester United – is the real deal.

The Young Lions suffered an early exit after losing 2-1 to France before Friday’s 4-2 loss to Romania, joining Croatia on an early flight home from Group C.

Maddison has failed to have an impact in Italy but Benkovic has already seen enough of the 22-year-old’s quality.

“He is a top talent and has a big future ahead of him,” Benkovic told Press Association Sport, ahead of Croatia and England’s dead rubber in San Marino on Monday.

“He has a big career in front of him. I was only with him a month but with good players you can see their quality within two or three training sessions.

“He is an unbelievable player, he had a great season and he made a difference in the Premier League.

“He played against the top teams in the world and he made a difference on the pitch, you can see his quality in every move.”

Benkovic made his senior Croatia debut earlier this month after an impressive season on loan at Celtic.

The 21-year-old helped the Hoops to a historic third straight treble in Scotland.

“Overall I’m very satisfied and I appreciate Celtic giving me a chance to play – and in Europe as well,” said Benkovic, who joined Leicester for £13million last summer.

“I was lucky as I played in Dinamo (Zagreb) where it was high pressure as well, you need to be first every year. That was OK for me, I was calm in the head having so much pressure at Celtic but I enjoyed every game.”

Croatia’s Under-21s have been unable to repeat the senior side’s success of last year when they reached the World Cup final.

Benkovic has struggled with a foot injury and was an unused substitute for Friday’s 1-0 defeat to France but is expected to be fit for Monday’s game.

And he admits he is still using last year’s tournament in Russia as inspiration.

“I watched the final on television in Croatia and it was incredible, the atmosphere at home was unbelievable,” he added. “The whole country was proud and out on the streets, it was an unbelievable experience.

“It’s special moments in your life something like that and it stays in your memory.

“It inspires you because you play for your country to make the fans happy and to make them proud.”