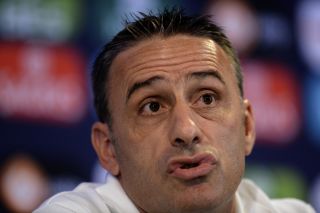 The result at the Estadio Jose Alvalade in Lisbon was a big blow to Portugal's hopes of automatic qualification to Brazil 2014 as it left Bento's team three points behind Group F leaders Russia, who cruised to a 4-0 win over Luxembourg.

Portugal must defeat Luxembourg on Tuesday and hope Russia lose away to Azerbaijan, while Bento's team will also need to make up seven goals worth of goal difference.

The Portuguese could have been just one point behind Russia after Ricardo Costa gave them a first-half lead on Friday but Eden Ben Basat's 85th-minute equaliser for Israel ensured Bento's side will probably have to play a two-legged play-off to reach next year's World Cup finals.

"In the second half we started just as well but after 10 minutes... we had more difficulties to move the ball, we were more inaccurate and ended penalized for a game situation that can happen," Bento said.

"We tried to react but more with the heart, using a more direct game that we are not prepared for.

"We ended up being penalized for a mistake."

The mistake Bento was referring to was made by goalkeeper Rui Patricio, who cleared the ball straight to Ben Basat on the edge of Portugal's defensive penalty area with five minutes remaining and the Israeli striker made no mistake to score the equalising goal.

But Bento refused to blame Patricio after his team had wasted a number of chances to score a second goal.

"Mistakes are made collectively," Bento said.

Costa, Portugal's goal-scorer, added he and his teammates would have to support Patricio after his error.

"We must raise his head."

Portugal cannot finish worse than second in Group F but if they fail to reign in Russia, they will face one of the other second-placed teams in Europe's World Cup qualifying system for a spot at Brazil 2014.