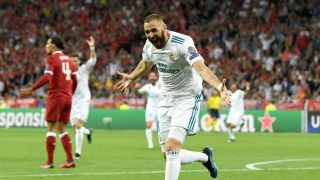 The Frenchman capitalised on a Loris Karius error to open the scoring in Kiev as Real Madrid won a 13th European Cup courtesy of a 3-1 victory.

Benzema intercepted a Karius throw, sticking his foot out before seeing the ball roll into the bottom corner.

Speaking to Kuwaiti television, Benzema – who was left out of Didier Deschamps' squad for the World Cup in Russia – believes good fortune did not play a part.

"I do not believe in luck, it's a matter of work.

"It's an easy goal but you have to be there, in the right place and at the right time, to put it in."