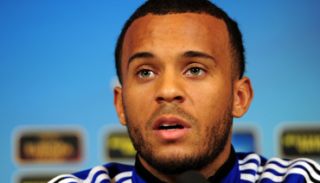 The London club began the campaign with a chance of picking up seven trophies and slowly but surely their dreams were scuppered in the Community Shield, European Super Cup, Champions League, World Club Cup, Premier League, FA Cup and League Cup.

Holders Chelsea's disappointing third-place finish in their Champions League group meant they were forced to compete among the also-rans in the second-tier Europa League and the final represents their last hope of silverware.

"There might be a slight sense of underachievement bearing in mind we started the season looking at the possibility of winning seven trophies," Bertrand told Reuters in an interview.

"The way it has gone, this has probably been the most testing season Chelsea have ever had. The players have had to dig deep, fighting to the last minute in every game to get ourselves in a final and hopefully we can get our hands on some silverware."

England international Bertrand said the squad wanted to give interim manager Rafael Benitez the perfect send-off before he leaves at the end of the season, as media reports suggest Jose Mourinho is returning for a second stint at the helm.

Benitez has had to plot his way through a gruelling schedule of fixtures since taking over in November and has had little support from the Stamford Bridge fans who idolised Champions League-winning predecessor Roberto Di Matteo.

"We definitely want to send Rafa off in style," said the 23-year-old left-back. "It would be fantastic for the players, for Rafa and for the whole club especially after the up and down season we've had."

The Europa League final will be the 68th match of a punishing campaign for Chelsea and Bertrand praised the way Benitez had rotated the squad to maintain the fitness levels of all the players.

"He has made sure to rest players here and there and when you look back at the season, it's been needed," the defender explained.

"It's not always going to work to your advantage when you have to utilise the whole squad but I think Rafa's done a good job."

Chelsea achieved one of their targets on Saturday when a 2-1 victory at Aston Villa guaranteed a top-four finish in the Premier League and probable qualification for next season's Champions League.

"We don't have a massive squad so it's credit to the lads," said Bertrand. "When you look at second-placed Manchester City, they've played about 51 or 52 games - look at us, we're approaching 70.

"It's a big difference and it goes to show how hard we've worked. You've got to consider all the travelling we've done too.

"It's been a tough ask but it's all part and parcel of our jobs and we're not complaining," said Bertrand as he attended an Adidas Champions League function at the Harrods store in Knightsbridge.

"We've just rolled our sleeves up and cracked on, even though a l