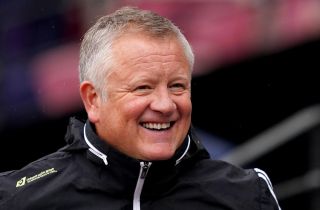 Sheffield United boss Chris Wilder insists his side are still finding their feet in the Premier League and expects them to improve.

It could be exciting news for Blades fans, who must be delighted after seeing their team make a solid start to life back in the top flight.

Wilder’s men are eighth in the table after 10 matches – which includes victories against Everton and Arsenal as well as a draw at Chelsea.

It represents a rapid rise under Wilder, with the club in League One when he was appointed manager in the summer of 2016.

“It’s important people remember that,” said Wilder. “We are still newcomers into the division – this team that has come up from League One.

“I still have to keep reminding people that that’s the situation. We weren’t this ridiculously powerful Championship club that has an unbelievable amount of money to spend who were getting set for the Premier League. We’ve done it in double-quick time and the boys are still learning.

“We’ve got young players in there and it’s their first season in the Premier League, and I think you must look at that when people criticise or have an opinion on certain players. But I think they are doing great and that’s all that matters.

“We wouldn’t have got the results we have if we hadn’t adapted well in certain situations but we are looking to improve – to improve the players individually and to improve as a group.

“There’s still a long way to go and our feet are on the ground but we are delighted with the start we’ve made, but as I’ve said before it is only a start and the challenge is to continue and be consistent in performances.”

Sheffield United host Burnley on Saturday as they look to extend their unbeaten run to four Premier League games following away draws at Watford and West Ham, either side of victory against Arsenal at Bramall Lane.

“I have a lot of respect for Burnley and (manager) Sean Dyche and it will be as hard a game as we will face this season, they are a very good, well organised team who know exactly what this division is about,” said Wilder.

The Blades have a couple of injury concerns for the match. Wilder did not name the players who are nursing knocks but said he was hopeful they would be fit for selection.

Wilder could continue to rotate his strikers and Lys Mousset’s equalising goal after coming off the bench at West Ham might see him restored to the starting line-up.