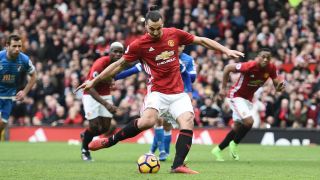 The striker missed a late penalty as Jose Mourinho's side failed to take advantage of a red card for Andrew Surman at the end of the first half.

A dramatic opening period also saw Ibrahimovic and Tyrone Mings escape red cards themselves - the United forward caught the Bournemouth defender with an elbow moments after what appeared to be a stamp on his head prior to Surman's dismissal.

Ibrahimovic, who insisted Mings "jumped into my elbow", was reluctant to discuss the incident that saw the Bournemouth defender appear to stamp on him.

"Instead, I take full responsibility. I didn't score and we didn't win. We are very disappointed and we should have won.

"I take the blame. I missed the penalty. I had a lot of chances and should have scored. I didn't and I take fully the responsibility. I will rise from this and come back even stronger and continue. This is nothing unusual, it has happened before and it can happen again."

Ibrahimovic added: "We will keep working, keep going and keep our heads up. I mean if you create so many chances, you should score. You expect to score, you want to score.

"We missed a lot of opportunities, only took only one point and it should have been there with the situation we had, the advantage of playing with one more [player]. We should have closed the game already in the first half.