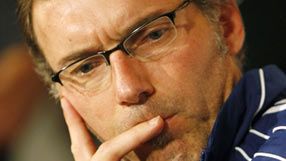 "Everybody agrees that the national sides must have more importance," Blanc told Reuters in an interview on Tuesday ahead of next week's friendly against England at Wembley.

"There were two competitive (Euro 2012 qualifying) matches in September and it's a good thing because everybody is happy - the fans and the players.

"In October, there are two more games and people regain interest in the national team and then we tell them... it's over, the curtain drops as we (don't) play another qualifier until March (2011).

"So the fans forget about the national team," added Blanc, who had a black shirt and navy blue jumper draped around his shoulders.

Blanc, who left his Girondins Bordeaux coach job to take over from Raymond Domenech after the World Cup, blamed UEFA's Champions League competition for stifling the international calendar.

"I agree the leagues are important, the Cups are important but you can't have a competition wiping out all the others, especially at the expense of the Euro qualifiers," he said.

"If the system was coherent, national teams should play one or two games every month or every six weeks."

Blanc's concerns are likely to fall on deaf ears since three rounds of Champions League matches take place between November and December followed by the last 16 matches in February which will be contested over four days.

"From November to February, nothing. Why is that?

"The Champions League dominates all other competitions and I am not the only one thinking that. It's not only the clubs' fault. It's also UEFA's," he added singling out the governing body of European football.

Due to the barren period ahead, Blanc is taking the trip to Wembley very seriously even though the match against England is just a friendly.