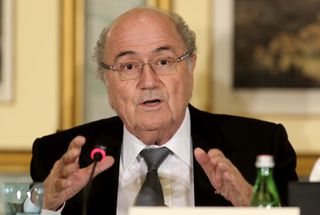 The 2022 World Cup hosts have come under fire from human rights group Amnesty International in recent days for their treatment of workers in the country, and Blatter has agreed they need to change.

Blatter was present at a meeting between the International Trade Union Confederation (ITUC) and Confederation of German Trade Unions, mediated the president of the German Football Federation (DFB) Wolfgang Niersbach, to discuss the issues raised surrounding Qatar.

It was agreed at the meeting in Zurich that improvements must be made, and the 66-year-old insisted he is confident that action is being taken by the Arab state.

"Economic and political leaders must contribute to improving the unacceptable situation in Qatar," Blatter said in a statement.

"That is why I welcome the initiative shown by the DFB and ITUC because together we can achieve change.

"I am convinced that Qatar is taking the situation very seriously. These very discussions about Qatar show just what an important role football can play in generating publicity and thus bringing about change."

ITUC chairman Michael Sommer was delighted to get the backing of football's world governing body and set out what was expected from Qatar.

"We are very pleased that FIFA and the DFB have joined us in our mission to establish humane working conditions in the host country of Qatar," his statement read.

"Qatar must guarantee the ILO's (International Labour Organisation) core labour standards and thus eliminate discrimination and forced labour as well as allow freedom of association for its 1.3 million migrant workers."