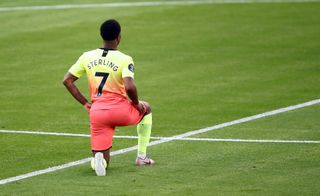 The Premier League’s support of the Black Lives Matter movement “does not set any particular precedent”, according to its chief executive Richard Masters, who warned players and managers will still face punishment for making unapproved political gestures.

The competition, its clubs and players have thrown their weight behind the cause, which seeks equality for black people across the globe.

BLM demonstrations have taken place in cities around the world following the death in police custody of George Floyd in the United States in May.

For the opening matches of the Premier League, player names on shirts will be replaced by Black Lives Matter.— Premier League (@premierleague) June 19, 2020

Premier League players’ shirts bore the slogan in place of their names in the first round of top-flight matches after the competition restarted amid the coronavirus pandemic.

Players and staff also showed their support for the cause by taking the knee before kick-off.

Masters was asked about whether the campaign would legitimately open the door to other forms of activism in the future, with past gestures such as Manchester City boss Pep Guardiola’s wearing of a yellow ribbon in support of Catalan independence having been met with a fine.

Speaking to MPs at a Digital, Culture, Media and Sport committee evidence session, he said: “We are drawing a clear distinction between a moral cause and a political movement or agenda.

“Whilst there might be difficulties sometimes dividing the two, our position is clear: politics no, moral causes yes, when agreed. As I said we’re living in special times at the moment.

“On this occasion we have decided to support (the players). That doesn’t mean to say whenever players on an individual or collective basis want to do something that the Premier League and clubs will be duty-bound or willing to support it.”

He added: “I don’t think it sets any particular precedent and, going back to the point about political messaging, I think it might become slightly torturous, but it might be possible to support Black Lives Matter, the sentiment, without being seen to be supporting any political organisation.

“We are an apolitical organisation, we don’t support political organisations. I think we are happy to support the players, we think it’s the right moment to do it, and for the first time I feel players, managers, league and clubs are on the same page on the issue of discrimination, and that feels to me like a positive step.”

Asked whether that meant fines would still be issued for unapproved political gestures, he added: “Yes, if you do something without permission you are breaching the regulations, so you can expect to be punished or fined.”

Masters said that any such campaigns would have a “very high bar” to reach in order to be officially approved by the league and its clubs.

“I wouldn’t say it was a complete one-off, but obviously we are in extraordinary, unique circumstances,” he added.

“We are running a football competition, we are not a campaigning body, if players did want to come forward we would listen to them but there has obviously got to be a very high bar and unique circumstances in place.

The #PL stands alongside players, clubs, @FA, @EFL, @PFA, LMA, PGMOL and all those who have come together in recent weeks to reject racism and to show support for the message that black lives matter— Premier League (@premierleague) June 30, 2020

“I’m not anticipating that there will be player-led causes on a quarterly basis going forward.”

The Premier League later released a statement saying it did “not endorse any political organisation or movement, nor support any group that calls for violence or condones illegal activity”.

It added: “We are aware of the risk posed by groups that seek to hijack popular causes and campaigns to promote their own political views. These actions are entirely unwelcome and are rejected by the Premier League and all other professional football bodies, and they underline the importance of our sport coming together to declare a very clear position against prejudice.”