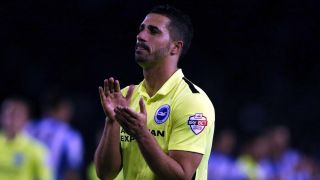 Brighton and Hove Albion midfielder Beram Kayal is facing at least two months out of action after suffering a broken leg.

The 29-year-old sustained a fractured fibula in Sunday's friendly loss to Atletico Madrid and was sent for an operation on Wednesday.

Manager Chris Hughton says the break was "clean" but he still expects the Israel international to be sidelined until the latter part of October.

"We don't expect any complications, but it's bad news for us and for him," Hughton said.

"The good news is it was a clean injury as such. The operation went very well; we expect him to be out for a period of something like eight to 10 weeks."

Kayal, who arrived from Celtic in January 2015, missed a large part of last season with an ankle problem and has suffered a number of injuries during his career.