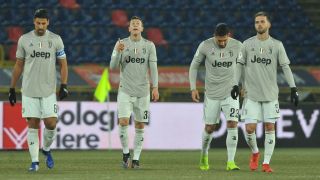 Defending champions Juventus sailed into the quarter-finals of the Coppa Italia thanks to a straightforward 2-0 win at Bologna on Saturday, Federico Bernardeschi and Moise Kean getting the goals.

Massimiliano Allegri rested several first-team regulars, such as Cristiano Ronaldo and Paulo Dybala, but still Juve were a class above and in complete control throughout, sealing victory without truly exerting themselves.

A goalkeeping howler allowed Bernardeschi to give the visitors the upper hand with just nine minutes on the clock and it looked a long way back from there even so early on for Bologna.

Kean, 18, wrapped things up soon after the break thanks to a poacher's finish, his first goal of the season, and Juve eased into the last eight in pursuit of a fifth consecutive Coppa title.

Relegation-threatened Bologna gifted the Serie A leaders an early breakthrough – goalkeeper Angelo Da Costa colliding with Arturo Calabresi and dropping the ball for Bernardeschi on the edge of the box, with the winger subsequently converting.

Leonardo Bonucci was the next to go close, meeting Bernardeschi's corner with a header in the 29th minute, but on this occasion Da Costa managed to hold on to the ball.

Juve increased their advantage just after the interval as Kean reacted quickest after Douglas Costa's shot had been blocked, the young forward coolly prodding into the bottom-right corner from eight yards.

Kean was then withdrawn for Ronaldo just past the hour, though the Portugal star was unable to make the score even more comfortable, with Bologna limiting the damage in the latter stages.

A first ever Juventus goal in 2017 at the Dall'Ara, and now a first goal of the season in the same place tonight, well done Moise Kean! #BolognaJuve#CoppaItalia#ForzaJuvepic.twitter.com/Iy1SRlhlG7— JuventusFC (@juventusfcen) January 12, 2019

What does it mean? Kean takes his chance

After being loaned out to Hellas Verona last season, first-team opportunities have been hard to come by for Kean, who has made only one top-flight appearance. He was not exactly a constant threat to the Bologna defence, but he had one clear-cut opportunity and took it. You cannot ask for much more than that.

Bernardeschi a nuisance in attack

No one was truly spectacular for Juve, but Bernardeschi put in a strong shift in attack, working hard off the ball while creating a few chances and getting himself a goal.

Bologna's goalkeeper Da Costa made that woeful mistake for the opening goal and never really made amends, looking shaky on other occasions as well. A day to forget for him.

Juve face a trip to Saudi Arabia on Wednesday for their Supercoppa Italiana clash with AC Milan, before returning to Serie A action five days later at home to Chievo. Bologna, who sit 18th, travel to SPAL next Sunday.