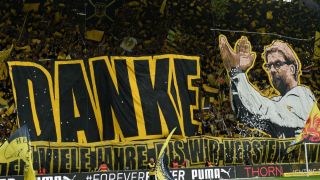 Borussia Dortmund put on a show in an emotional Signal Iduna Park farewell for Jurgen Klopp by beating Werder Bremen 3-2 to secure a place in the UEFA Europa League.

The hugely popular Klopp will end his successful seven-year tenure as Dortmund coach after next weekend's DFB-Pokal final against Wolfsburg and his players read the script for his final Bundesliga game in charge on Saturday.

Dortmund were bottom of the table earlier this year, but only needed a point to secure European qualification.

They took all three, however, courtesy of first-half goals from Shinji Kagawa, Pierre-Emerick Aubameyang and Henrikh Mkhitaryan.

Levin Oztunali scored his first Bremen goal after Aubameyang's 24th of the season to make it 2-1, and Theodor Gebre Selassie's late strike set up a tense finale but Bremen were unable to spoil the party and miss out on a European spot after finishing 10th.

Augsburg's 3-1 win at Borussia Monchengladbach ensured Dortmund finished seventh and on the evidence of this impressive display, incoming coach Thomas Tuchel will not require wholesale changes when he replaces Klopp.

Long-serving midfielder Sebastian Kehl was also given a rapturous reception in his final home game before retiring, but Klopp took centre stage and it was fitting that his side delivered at a stadium where the charismatic coach has enjoyed so much success.

Backed by their vociferous supporters, Dortmund made a blistering start and were unfortunate not be in front when Marco Reus' cross was met by an unmarked Aubameyang, but the striker's close-range effort came back off the post just nine minutes in.

It appeared to be only a matter of time before Dortmund took the lead and the opening goal came with a helping hand from Jannik Vestergaard after 15 minutes.

The Bremen defender's sloppy pass was pounced upon by Ilkay Gundogan, who evaded a desperate challenge from Vestergaard before laying the ball off to Kagawa and the midfielder showed great composure to take his time before finishing with his left foot from inside the area.

Bremen looked rattled and Dortmund took advantage by doubling their lead two minutes later, when Aubameyang played a one-two with Kagawa before taking a touch and placing a clinical finish into the far corner of the net.

Such was Dortmund's dominance it was difficult to see a way back for Bremen, but they halved the deficit out of the blue after 26 minutes when Oztunali turned sharply in the area before firing under Roman Weidenfeller.

Bremen looked dangerous going forward, but wide open at the back and they were caught out on the break three minutes before the interval.

The visitors piled men forward for a corner and were undone by a rapid counter-attack, resulting in Kagawa delivering a fine pass for the unmarked Mkhitaryan and the Armenian controlled in an instant before beating Koen Casteels with a classy chipped finish.

The lively Aubameyang twice went close to adding a fourth and Mkhitaryan struck the crossbar as Bremen struggled to live with Dortmund's attacking threat.

Gebre Selassie converted Zlatko Junuzovic's free-kick five minutes from time when Dortmund should have been out of sight before Kehl was given a great ovation when he was brought off and the home side held on to ensure Klopp was able to toast an emotional victory.