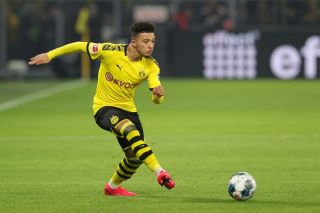 Ever since he arrived at Borussia Dortmund three years ago, Jadon Sancho has been destined to leave sooner rather than later.

The Bundesliga side have become a platform for outstanding young players to be exposed to elite football earlier than anywhere else in order to accelerate their progress and provide a springboard to one of the world’s biggest clubs.

Sancho was prepared to leave Manchester City for Dortmund because he trusted that he would be given more opportunities and he has been richly rewarded for his decision.

Still only 19, the winger is already approaching his 100th senior appearance at club level and has become perhaps the most exciting prospect anywhere in football, alongside his teammate Erling Haaland.

Sancho is enjoying the best and most productive season of his burgeoning career, scoring 17 goals and registering 19 assists from 35 appearances in all competitions.

He’s also become an indispensable part of Gareth Southgate’s England squad, getting off the mark with a brace in a 5-3 win over Kosovo back in September.

While former teammate Phil Foden is still waiting for his first cap, Sancho has already collected 11 since making his debut against Croatia in a match played behind closed doors.

With Manchester United, Chelsea and Liverpool circling, Dortmund CEO Hans-Joachim Watzke has admitted that the club won’t stand in Sancho’s way if he asks to leave.

“Jadon is a very, very great talent, perhaps the greatest currently in Europe among players under the age of 21,” Watzke said in an interview with RMC Sport.

“In my opinion, he has the potential to become one of the top two or three players in the world in the years to come.

“We will do our best to keep him as long as possible. We have a very good relationship with him. But if one day, he comes to see us and tells us that he wants to leave the club, then we will discuss it.”