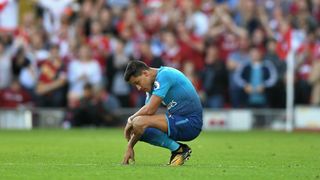 Claudio Bravo is holding out hope that Manchester City will eventually succeed in their pursuit of Arsenal star Alexis Sanchez, having described the striker's "bitterness" at seeing the transfer fall through last month.

Pep Guardiola had reportedly earmarked Sanchez as a top target in the transfer window, but City could not land their man, with Arsenal refusing to sanction an estimated £60million deadline-day move after their own attempts to sign Thomas Lemar failed.

Sanchez returned to a mixed reception from the Emirates Stadium crowd after coming off the bench in Saturday's 3-0 win over Bournemouth, and Bravo is hopeful City will return for his international colleague in January.

He told reporters: "We were talking in Chile. He went from happiness to bitterness in a few hours, although it's all in the past now.

"The transfer didn't happen because a player didn't go to Arsenal and everything collapsed.

"We would have loved to have him here, but the market gives you these time limits and the rush is not good.

"This time it was not possible, but hopefully we have him here in the future."