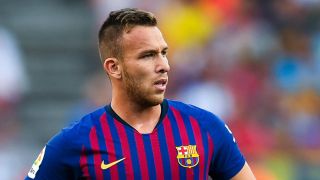 The midfield duo have been named in Tite's squad for September friendlies against United States and El Salvador.

Manchester City had four players in Brazil's World Cup squad but there is no place for any of them in Tite's latest 24-man selection, with Real Madrid left-back Marcelo also notably missing.

Danilo is injured but Fernandinho and Ederson are surprise omissions, while Gabriel Jesus drops out after failing to score at Russia 2018.

Ederson won his first senior cap for Brazil earlier this year but has been left out of the squad for personal reasons.

Pedro, the 21-year-old Fluminense forward who is the top scorer in the Brazilian league with 10 goals, is another potential debutant included the squad.

With the international matches clashing with the first leg of the Copa do Brasil semi-finals, Flamengo look set to be without Lucas Paqueta after the uncapped midfielder was included along with the club's teenage goalkeeper Hugo.

Full-backs Fagner, who plays for Corinthians, and Cruzeiro's Dede are also set to miss the opening games of the semis.

Liverpool's new signing Fabinho is listed among the full-backs and is included alongside club team-mates Alisson and Roberto Firmino.