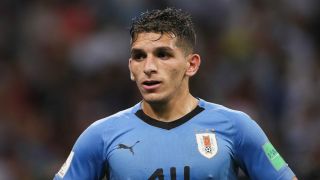 Arsenal have completed the signing of Uruguay midfielder Lucas Torreira from Sampdoria.

The Premier League are reported to have paid £26million to sign the 22-year-old, who appeared in all five of Uruguay's matches at the World Cup.

Arsenal teased the announcement with a social media video before announcing the deal themselves on Monday.

During his two years at Sampdoria after joining from Pescara, Torreira made 74 appearances and scored four goals for the club.

In a brief statement announcing his departure, the Serie A club wished Torreira the "greatest good luck for the rest of his career".

Arsenal are also expected to announce the signing of France Under-20 international Matteo Guendouzi, who is set to join from Lorient.

"In Lucas Torreira, we have signed a young player who is a very bright talent in the game," said Emery.

"A midfielder with great quality, I have enjoyed watching his performances for Sampdoria in the past two seasons, and we all saw him do very well for Uruguay in the World Cup.

"He is a young player already with good experience, but who wants to keep on growing. We welcome Lucas to Arsenal and look forward to him joining us soon for pre-season."

Torreira will wear the number 11 shirt vacated by Mesut Ozil, who has switched to number 10 for the new season, and will link up with the squad in early August after a post-World Cup break.