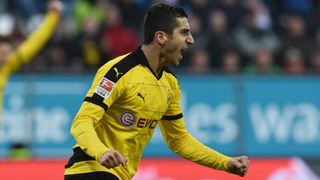 Although the Red Devils are yet to officially confirm the transfer, Mourinho appears to have finally got his man after United were forced to put in an improved offer worth a reported €40million, their initial advances for the 27-year-old having been knocked back.

"We had a difficult decision to make when it comes to this transfer," Dortmund chief executive Hans-Joachim Watzke said in a statement.

"Manchester [United] tabled a huge offer. The player would have left us on a free transfer in 2017 had we refused the offer. And we would only have delayed finding a successor by another year."

Mkhitaryan should slot directly into Mourinho's starting line up with United lacking a recognised senior option on the right side of the attack, with former manager Louis van Gaal having used makeshift wingers like Jesse Lingard and Juan Mata during his final season at Old Trafford.

The pacey wide player scored 23 goals in all competitions for Dortmund last season, laying on another 32 for his team-mates in his best season yet for the German outfit.

He joins United as their third major signing of the off-season after the addition of Ivory Coast defender Eric Bailly from Villarreal and Zlatan Ibrahimovic on a free transfer following his departure from Paris Saint-Germain.