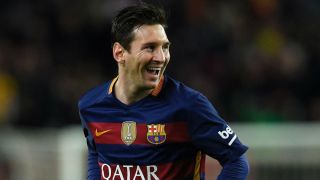 Lionel Messi reached the milestone of 500 career goals for Barcelona and Argentina against Valencia in La Liga on Sunday.

The 28-year-old's strike in the 63rd minute at Camp Nou moved his tally for Barca to 450 goals, while he scored his 50th for his country with a penalty against Bolivia during last month's international break.

Messi had missed the chance to hit the landmark in Barcelona's Clasico defeat to Real Madrid, both legs of his side's Champions League defeat against Atletico Madrid and their La Liga loss to Real Sociedad as part of his longest goal drought for Barca in six years.

But he was on hand just after the hour as he guided home a low cross from Jordi Alba.

Messi scored his first senior goal during Barca's 2-0 La Liga win over Albacete in May 2005, while he opened his Argentina account in 3-2 friendly defeat to Croatia in March 2006.

The forward's best goalscoring season for Barca was 2011-12, when he netted 73 goals in all competitions, 50 of those coming in La Liga.

He netted 12 times for Argentina in 2012 in what was the most productive calendar year of his international career to date.

Messi has won 26 trophies with Barca, but is still waiting for his first major honour with Argentina's senior side, having been a runner-up in the World Cup and Copa America over the last two seasons.

The 500 goals have come in 632 appearances across all competitions for club and country.