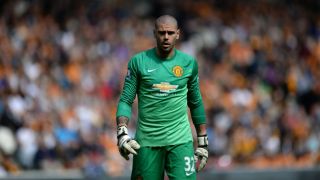 The newly promoted Premier League club have confirmed that the 34-year-old has signed a two-year deal at the Riverside.

Valdes arrives at Middlesbrough as a free agent after his contract with United expired. He fell out with former manager Louis van Gaal at Old Trafford and ended up spending a spell on loan at Belgian club Standard Liege towards the end of last season.

Boro head coach Aitor Karanka told the club's website: "You can't imagine how delighted I am because it's not usual to bring players like him to recently promoted teams.

"I'm really pleased because he is really committed. All the conversations we've had he knows why he is here and he is coming to add to what we have.

"He knows how strong this group is. It's a privilege for us to be able to bring a player like this to the club."

Prior to signing a contract with United in January 2015, Valdes had a glittering career at Barcelona. The shot-stopper won six La Liga titles and three Champions League crowns in 12 seasons as a first-team regular at Camp Nou.

Valdes earned 20 Spain caps between 2010 and 2014, winning the World Cup in South Africa and Euro 2012 without playing a match in either tournament.

The arrival of Valdes means Boro have so far signed five players in preparation for their Premier League return and comes three days after the addition of midfielder Marten de Roon from Atalanta.