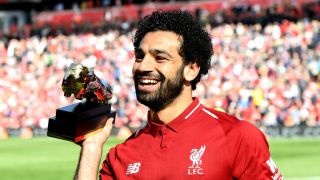 Mohamed Salah has signed a new long-term contract with Liverpool, the Premier League club have confirmed.

According to multiple reports, the deal runs until 2023 and contains no release clause.

Despite only joining from Roma just over a year ago, Liverpool have rewarded Salah following a sensational debut season on Merseyside that saw him finish with 44 goals in 52 appearances.

The Egypt international secured the Premier League Golden Boot, finding the net 32 times to finish ahead of Tottenham's Harry Kane with a new competition record for goals in a 38-game season.

Jürgen Klopp believes 's decision to a sign a new long-term contract is an indication of the direction in which are heading: July 2, 2018

Salah was also a key part of Jurgen Klopp's squad in Europe, helping them reach the Champions League final.

However, the 26-year-old's involvement in the showpiece event was cut short by a shoulder injury suffered in a first-half challenge with Real Madrid's Sergio Ramos, as Liverpool lost 3-1 in Kiev.