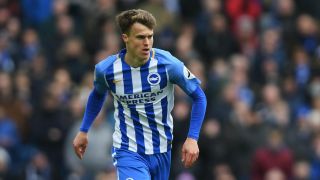 Brighton and Hove Albion have confirmed Solly March has agreed a new four-year deal with the Premier League club.

And he marked his 24th birthday in style on Friday by putting pen to paper on a new contract with the Seagulls.

"I am delighted for Solly, as he's worked extremely hard to get to this level and thoroughly deserves his new deal," said manager Chris Hughton.

"He's proved an important member of the squad in recent seasons, and despite being relatively young, Solly has collected a good amount of experience this early in his career.

"With our second Premier League season just around the corner, it's great for Solly to commit his future to the club and now he can fully focus on the campaign ahead."

Any ideas for what to get for his birthday today? What about a new contract?  July 20, 2018

"I couldn't have asked for a better birthday present. It's nice to know that I've got another four years at the club, and now I can knuckle down and get going again," he said.

"I know that I've got four more years at the club, so I don't need to worry about anything and I can just focus on playing football.

"It's nice to play for my local club - I was born and raised in Sussex, so it makes it that extra bit special. Our aim is to stay in the Premier League again, and I'm really looking forward to the season ahead."

Friday was a busy day for Brighton, who completed the signing of South Africa international Percy Tau on a four-year contract after an undisclosed fee was paid to Mamelodi Sundowns.

Striker Tau will be loaned out after following players including Mali international Yves Bissouma, RB Leipzig defender Bernardo and forward Florin Andone from Deportivo La Coruna in joining Brighton in the transfer window.