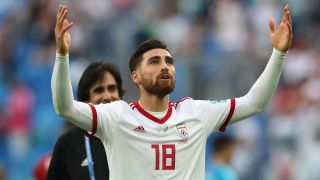 Alireza Jahanbakhsh hopes to make an immediate impact at Brighton and Hove Albion after completing a reported £17million move from AZ.

The Iran international - who featured in all three of his country's matches at the World Cup - penned a five-year contract with the Seagulls on Wednesday and is determined to force his way into Chris Hughton's first-team plans.

Jahanbakhsh scored 21 goals and recorded 12 assists in the Eredivisie last season as AZ finished third behind PSV and Ajax.

He almost joined Brighton three years ago but opted to stay in the Netherlands, however the winger is confident now is the right time to move to the Premier League side, who have made him their club-record signing.

"I came here to help the team and be important for the team," he told the club's official website.

"It's always been important for me, wherever I go, to do my best for the club and the fans.

"It's exactly the same here. I've been counting the days until I came here for the signing day.

Want more GIFs of the new man?Head to our channel!Channel July 25, 2018

"Finally everything is done now and I can look forward to starting training, seeing the fans and going to the stadium to play games.

"We have some good players this season, and after speaking to the manager, I have a really good feeling about the tactics and the way the team plays."

Hughton added: "We are delighted to welcome Alireza to the club, and we are particularly pleased to get this deal over the line.

"Ali is a player that we have been aware of and monitored for a few years, and his versatility will increase our attacking options within the squad.

"He can play in a wide position or central midfield attacking role, and I am now very much looking forward to working with him."