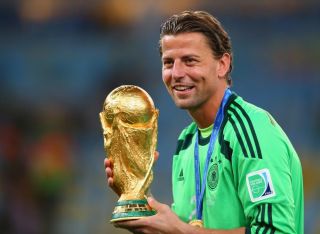 A number of Dortmund's World Cup stars were rested for last week's curtain-raiser against Bayer Leverkusen and their absence was sorely felt as Karim Bellarabi netted the fastest goal in Bundesliga history - after nine seconds - and Roger Schmidt's German top-flight debut ended in a 2-0 victory over last season's runners-up.

Weidenfeller watched on from the bench for the defeat, alongside fellow Germany internationals Kevin Grosskreutz and Sven Bender, but the goalkeeper will return to action after playing 45 minutes against Waldhof Mannheim in a midweek friendly.

After seeing his first-choice keeper play his first Dortmund game since May, coach Jurgen Klopp expressed relief at the 34-year-old's return.

"It's good to have him back," said Klopp.

"I already thought about bringing him on against Leverkusen, but I wanted to take this opportunity to see him having 21 players running in front of him.

"If nothing happens on the way home, he will play on Friday."

Ciro Immobile and Marco Reus each found the net as Dortmund swept the fourth-tier Waldhof aside 4-0 on Tuesday, and Klopp will hope the result has boosted confidence among his squad.

Dortmund's pre-season preparations were wrecked by a string of injuries and Klopp remains without the services of Oliver Kirch (thigh), Ji Dong-won, Marcel Schmelzer (both muscular), Nuri Sahin, Jakub Blaszczykowski (both knee) and Ilkay Gundogan (back).

Klopp is more positive over the fitness of Mats Hummels, Sven Bender and Adrian Ramos, but conceded their involvement at the SGL-Arena remains in doubt.

Augsburg were arguably the Bundesliga's surprise package of 2013-14 as they secured an eighth-place finish following two seasons of fighting relegation.

Markus Weinzierl's side were dumped out of the DFB-Pokal in the first round by Regionalliga outfit Magdeburg and went down 2-0 at Hoffenheim in their Bundesliga opener.

Without a goal to their name this season, some fingers may be pointing at new striker Tim Matavz for the team's woes, but captain Paul Verhaegh insists an improvement is required from top to bottom.

"We have to improve in all areas. We are working hard every day in training," he said.

And general manager Stefan Reuter - who won the UEFA Champions League as a Dortmund player - was quick to dismiss any suggestions that Weinzierl's job was under threat.

Reuter told Augsburger Allgemeine: "Markus Weinzierl is the perfect coach for us, regardless of what division we are in."