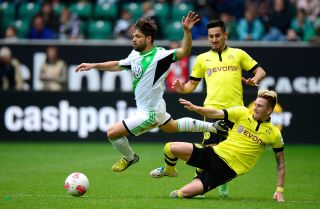 Pep Guardiola's men equalled Hamburg's mark of 36 games without defeat, set between January 1982 and January 1983, when they came from behind to defeat Hoffenheim last weekend.

Bayern, whose last league loss came against Bayer Leverkusen in October 2012, now have the opportunity to go one better as Markus Weinzierl's side visit the Allianz Arena.

Two of the Bundesliga's other in-form sides meet at the Volkswagen Arena on Saturday as Wolfsburg host Borussia Dortmund, with both teams having won their last three matches in the German top-flight.

Second-placed Dortmund dispatched Stuttgart 6-1 in their last league outing, thanks partly to a hat-trick from the division's leading goalscorer Robert Lewandowski.

While Jurgen Klopp's men are the league's top scorers with 31 from 11 games, they face a Wolfsburg outfit who have conceded just three goals at home in the Bundesliga this season.

Dieter Hecking's side, who sit fifth, will also be encouraged by the fact all of Dortmund's dropped points this season have come on the road.

Hecking could be without influential Brazilian midfielder Diego, who was withdrawn with a chest injury 32 minutes into a 2-1 win over Eintracht Frankfurt on Saturday.

Whether Diego recovers in time to face Dortmund or not, Hecking feels his side must improve further if they are to remain in the upper reaches of the Bundesliga.

"If we want to stay there, we are going to have to play better football," he told the club's official website.

"We have quite a game ahead of us against Borussia Dortmund and we are all looking forward to it. Then we will see exactly where we are."

Leverkusen will hope to keep pace with the top two and bounce back from a shock defeat to bottom side Eintracht Braunschweig when they host Hamburg.

Braunschweig have the chance to pick up back-to-back wins for the first time this season on Friday night. They take on a Hanover side who are winless in five league outings.

Werder Bremen would leapfrog Saturday's opponents Schalke with victory at the Veltins Arena while Hoffenheim can move ahead of Hertha Berlin by picking up three points at home to Jos Luhukay's team.

Nuremberg, the only team yet to record a league victory, will hope to break their duck when they travel to fourth-placed Borussia Monchengladbach.

Two of the league's bottom four are in action on Sunday. Eintracht Frankfurt, who are just above the drop zone, play at Mainz before Freiburg and Stuttgart round off the weekend's action at the Mage Solar Stadion.