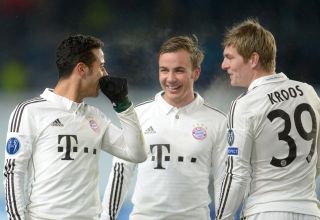 The odds will be stacked heavily in Bayern's favour, although they have been dealt a blow in the build-up to the clash, with captain Philipp Lahm ruled out due to a hamstring injury.

Lahm was forced off 28 minutes into his side's 3-1 UEFA Champions League win at CSKA Moscow on Wednesday, and will definitely miss Bayern's next two fixtures.

Franck Ribery has missed Bayern's last two games with a rib injury, while a calf problem kept Mario Mandzukic out of the trip to Russia, but both could be pushing to be in contention for Saturday.

If Croatia international Mandzukic is unavailable, coach Pep Guardiola is likely to continue with either Thomas Muller or Mario Gotze operating in a 'false nine' role in attack.

Despite their fitness issues, Bayern have been almost unstoppable this season, and thrashed title rivals Borussia Dortmund 3-0 at Signal Iduna Park in their last league outing to go four points clear at the Bundesliga summit.

Bayern come into the game having won each of their past 17 home fixtures, finding the net 59 times in those outings.

The visitors have picked up half of their eight-point haul for the season on the road, but will take no confidence from their record at the Bavarians, winning none and losing 14 of their 18 trips to face Bayern.

Braunschweig will be without Dennis Kruppke (calf) and Ken Reichel (knee), with Jan Hochscheidt also set to miss out, as he regains fitness after a muscle injury.

Head coach Torsten Lieberknecht conceded beating Bayern will be a near-impossible task for his side, but expects to see a committed performance.

He said: "To call it a Herculean task is an understatement. Worldwide, every team tries to bring Bayern to the brink of defeat.

"However, my guys are tense, looking forward to the game and will not put up the white flag.

"We need to be at our maximum but I cannot ask anything super-human from my team.

"Many opponents have already had many ideas (on how to stop Bayern), but none were enough to get something."