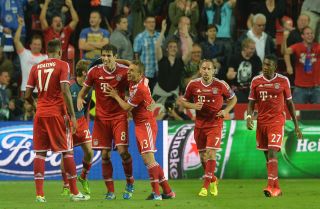 The European champions last lost a league fixture in October 2012, to Bayer Leverkusen, and are now just two matches away from equalling the longest unbeaten streak in the history of German top-flight football.

That record – set by Hamburg in 1974 – was challenged by Borussia Dortmund last year, but they saw their streak ended at 31 games.

Bayern have the chance to edge closer at the Allianz Arena on Saturday in an encounter that pits the table-toppers against a Hertha side who have defied the odds to sit fourth after nine matches.

Pep Guardiola's Bayern strolled past Viktoria Plzen on Wednesday, thrashing the Czech side 5-0 in the UEFA Champions League to extend their 100 per cent record in the competition this season.

Bayern, who have scored 25 goals in their last eight matches in all competitions, interestingly have just one player in the top 20 of the league's scoring charts.

Their even spread of goals means only one player has scored more than three times in the Bundesliga this season, that being Croatian Mario Mandzukic with five.

With so many avenues to goal, opposition defences have struggled to contain Bayern, but manager Guardiola is not getting complacent.

He saw warning signs in Saturday's 4-1 home win over Mainz – in which Bayern trailed 1-0 at half-time – and has urged his side to start better when they are the hosts.

"I'm pleased with the result, (but) we've always had problems in the first half here at the Allianz Arena," Guardiola said after that win.

"We need to improve on that very soon and I'm certain we will."

For Hertha, the chance to play on one of the biggest stages in European football is a great reward for last season's second-tier champions.

Hertha won the division by nine points last season, inspired by the form of Brazilian midfielder Ronny, who scored 18 goals.

He already has three this season, while Tunisia forward Sami Allagui has netted five, with their goals helping Jos Luhukay's side surge into a Champions League qualifying place.

All of the club's four wins in the Bundesliga have come in the German capital, with their away record showing three draws and one defeat.