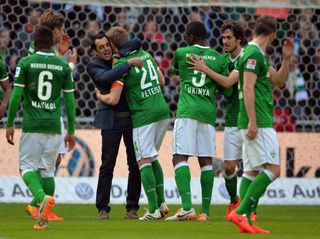 Despite failing to beat Bayern since September 2008, Robin Dutt's men are in decent form and Pep Guardiola likely to rest players ahead of Tuesday's UEFA Champions league semi-final second leg against Real Madrid.

The Bavarians will need to overturn a 1-0 deficit against Real, despite dominating large swathes of their first-leg clash at the Bernabeu.

Bremen have eased any relegation worries in recent weeks by collecting seven points from the last 12 available and they only need to match Hamburg's result at Augsburg this weekend to be mathematically safe.

The Weserstadion club will also have revenge on their mind, having been on the receiving end of a 7-0 thrashing to Bayern on home soil in December.

In the four Bundesliga games since being crowned champions in Berlin, Bayern have seen their 53-match unbeaten league run come to an end following two defeats and a draw before getting back to winning ways at Eintracht Braunschweig last weekend.

Despite Bayern's recent slump, and a failure to convert possession into goals in Spain, Dutt insists he still saw positives from their performance, and is wary of a backlash.

"It surprised me to see Bayern being criticised," Dutt said. "They have played so dominant away from home.

"If you must criticise someone, then it would have been Real."

When asked what kind of Bayern team he was expecting to face, Dutt remained guarded: "It will be difficult for us to anticipate the team line-up of Bayern."

Despite flirting with relegation, Werder have already bettered their points tally from 2012-13.

Midfielder Philipp Bargfrede is expected to feature at the Allianz Arena, despite picking up a knock last weekend. The 25-year-old missed training earlier in the week, but that was only a precaution and he will return on Saturday.

Bargfrede clashed with team-mate Clemens Fritz when picking his injury, but it is the latter who finished worse off and is set to miss two weeks with a knee injury.

Ozkan Yildirim (groin) is unlikely to feature and Levent Aycicek (foot) remains a doubt, but midfielder Felix Kroos has returned from a knee problem and will be available.

Rafinha will be suspended for Bayern after his dismissal against Borussia Dortmund, while Diego Contento (ankle), Xherdan Shaqiri (thigh), Thiago (knee) and Tom Starke (elbow) are all in the treatment room.