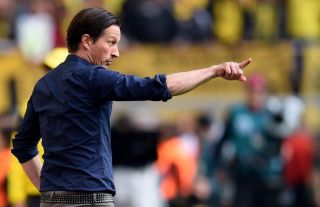 Schmidt joined Leverkusen during the close-season after an impressive tenure at Red Bull Salzburg and his transition appeared seamless against Borussia Dortmund on Saturday in their Bundesliga opener.

Karim Bellarabi got Leverkusen off to a record-breaking start at Signal Iduna Park as the winger netted inside nine seconds after producing a clever change of direction to beat Matthias Ginter, making it the fastest Bundesliga goal of all time.

Jurgen Klopp, entering his seventh season at Dortmund, had hoped to celebrate becoming the club's longest-serving coach with victory, but his side rarely troubled Bernd Leno is the visitors' goal.

A lack of fluency and fluidity in the Dortmund frontline proved to be a significant problem and Leverkusen eventually completed the 2-0 win in second-half stoppage time, as Stefan Kiessling found the top-right corner in emphatic fashion.

Like Dortmund, Schalke also endured a troublesome start to the season as they were defeated 2-1 at Hannover.

Coach Keller came under fire following the club's 2-1 DFB-Pokal defeat to third-tier Dynamo Dresden on Monday and his side failed to muster a response on Saturday.

Schalke began the clash well as they dominated most of the first half and their superiority continued into the second period, as Eric Choupo-Moting set Klaas-Jan Huntelaar up for an easy tap-in.

However, Hannover battled back after the introduction of Hiroshi Kiyotake and Edgar Prib levelled in the 67th minute, tapping in Leonardo Bittencourt's inch-perfect right-wing cross.

Seemingly inspired by their equaliser, Hannover netted again just three minutes later as the unmarked Joselu stroked home in his first Bundesliga appearance for the club, securing a fine win.

Werder Bremen also showcased admirable endeavour as they battled back from 2-0 down to draw 2-2 at Hertha Berlin.

Julian Schieber's double appeared to have secured Hertha all three points, but a quickfire double from Bremen early in the second half saw the spoils shared.

Assani Lukimya nodded Bremen back into the contest in the 53rd minute and Franco Di Santo then pounced on a rebound to knock home.

Hoffenheim cruised to a 2-0 victory at home to Augsburg thanks to goals from new signing Adam Szalai and Norwegian Tarik Elyounoussi.