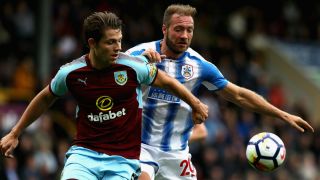 Burnley extended their unbeaten run to four Premier League matches in a dour 0-0 draw at home to Huddersfield Town on Saturday.

Both sides were looking to respond to midweek EFL Cup defeats but showed little life in attack as they settled for a share of the points.

Chris Wood, a scorer against the Terriers in each of the past two seasons, had the best opportunity of an otherwise forgettable first half when he nodded wide from close-range.

And the Clarets were made to rue that miss as they created few openings against a defence marshalled confidently by Christopher Schindler.

Tom Ince gave Sean Dyche's side rare cause for concern early in the second half, but the visitors were largely content to remain compact as they recorded a third league draw.

The combined absence of creativity ultimately proved too much for either side to overcome in what was their first top-flight meeting since March 1971.

Christopher Schindler has been a rock at the heart of the defence this afternoon. Around 10 minutes left to go! (CL) September 23, 2017

Neither team had mustered more than a single goal in a Premier League match since their opening-day victories and the early exchanges were typically tight, with the first real chance not arriving until Wood headed wide from Stephen Ward's inviting cross in the 23rd minute.

Burnley began to raise the tempo after the half hour as an incisive Robbie Brady pass put Ward in behind the Huddersfield defence, but Schindler impressively hooked the delivery away to deny Wood a tap-in.

While their defence coped with danger well, Huddersfield's attack lacked numbers and the visitors had only two off-target attempts to show for a scoreless first half.

The visitors came out of the break with renewed impetus as Ince drove at the heart of Burnley's defence and laid a chance off for Laurent Depoitre, only for the forward to finish meekly into the clutches of Nick Pope.

Crunching tackle from on Jack Cork as the sides go into the break with the scores level! (CL) September 23, 2017

Wood responded by testing Jonas Lossl at his near post before Ince flashed a dangerous drive wide just after the hour.

Huddersfield boss David Wagner introduced Rajiv van La Parra to inject more life in attack, but the speedy forward's first major involvement was to earn a yellow card for a blatant dive in the penalty area.

That incident proved to be the last act of drama as the contest ended in a fitting scoreless draw, with Wood's final attempt safely held by a largely untroubled Lossl.

Burnley will aim to continue their unbeaten run at Everton next weekend, while Huddersfield host in-form Tottenham.