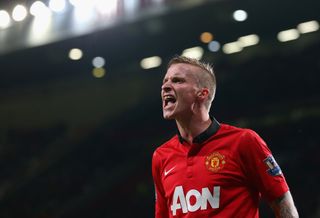 Left-back Buttner has yet to establish himself in the United first team, although he did feature in their 2-1 FA Cup defeat to Swansea City on Sunday.

David Moyes' men have been linked with moves for left-backs Leighton Baines and Luke Shaw as the Scot looks to bolster his squad following a disappointing first half of the season that has left the defending Premier League champions 11 points behind leaders Arsenal.

Still, Buttner has been unaffected by the speculation and has no desire to leave Old Trafford.

"If people talk about other players in my position, I don't care," he told the club's official website.

"I just want to play my game and show that I can handle the level. I know there are some clubs that want me but I'm happy here and want to play for United so I focus 100 per cent on here.

"I don't want to leave. I want to fight for my place. I am still young and I know what I can do. I just have to wait for my chances and take them."

Buttner expressed disappointment at United's third-round cup exit, but was satisfied with his individual performance.

"I think we did some things well but it’s difficult to play with 10 men," he added. "I'm disappointed and we have to focus on the next game now.

"It was nice to play and I want to play every game. It was good for my first game for a while. I'm just disappointed we lost because, if we win, then the feeling is different. I'm very disappointed but I think I did well."