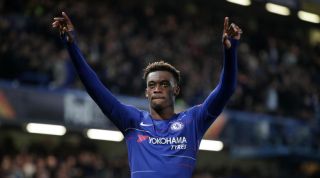 Chelsea winger Callum Hudson-Odoi is ready to commit his long-term future to the club, according to Football London.

The England international was heavily linked with a move to Bayern Munich in January, but Chelsea turned down a £35m bid from the German giants.

And the forward now believes Stamford Bridge is the best place for him to continue his development.

Reports in July suggested that Hudson-Odoi had agreed a new five-year deal with the Blues, but he has yet to put pen to paper on fresh terms.

However, it's thought to only be a matter of time before the 18-year-old – who is set to return to action this month following an Achilles injury – formally commits his future to the club.