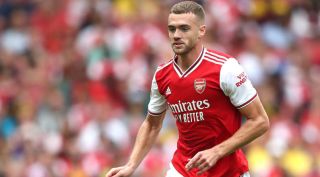 Chambers joined Arsenal from Southampton in 2014 for £18 million.

Despite a promising start to his time in north London, the versatile defender was eventually loaned out to Middlesborough in 2016.

In what was a tough season, Chambers was relegated with Boro but gained valuable experience along the way.

In a similar situation, the 24-year-old also went down with Fulham last season, but made a big impact - winning their player-of-the-season prize as a central midfielder.

The 24-year-old scored Arsenal's second equaliser against Aston Villa on Sunday, as Unai Emery's side twice from behind to beat Dean Smith's side with 10 men.

"I've had a lot of experiences over the years like going to Middlesbrough and Fulham, and playing a few games here at Arsenal," he told Arsenal Player.

"As a player and as a human, I feel like I've grown up quite a lot.

"I feel like I'm bringing the experiences I've had over the past few years into my game too.

"I just want to keep developing, keep working hard and keep improving things every day. That's all I can do, to focus on being the best player I can.

"I think to establish yourself here, you need to play week in, week out. It's the same at every club you go to.

"When you're playing week in, week out that's when you really establish yourself to the team and the fans."

Arsenal go up to against Manchester United next Monday, and Chambers will be hoping his recent good form has earned him a starting place.