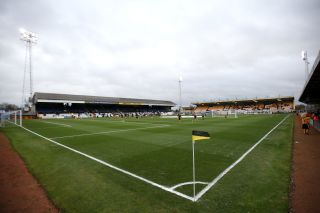 Cambridge will be the first English Football League club to welcome a limited number of fans into their ground with two matches to be used as part of the government’s pilot scheme later this month.

One thousand fans will be allowed inside the Abbey Stadium for the EFL Trophy fixture against Fulham Under-21s on September 8, with up to 2,500 supporters permitted for Cambridge’s opening League Two fixture of the season at home to Carlisle on September 12.

Both terracing and seating will be in use, with back-to-back fixtures selected in order to “allow for any learnings to be implemented quickly under the same conditions”.

The EFL said Cambridge had been selected after being part of a joint project involving the league and the Sports Ground Safety Authority.

BREAKING: @CambridgeUtdFC will welcome fans back to the Abbey next week!— Cambridge United FC (@CambridgeUtdFC) September 3, 2020

Cambridge chief executive Ian Mather said: “First and foremost, it is a real honour for Cambridge United to be able to represent our fellow professional football clubs, and lead the way in the government and EFL’s pilot work to reintroduce supporters to football stadiums at competitive matches across the country.

“For us to be able to welcome our own supporters back to the Abbey Stadium after such a long period away, I’m certain will be welcome news indeed to our fanbase, who have been incredibly supportive throughout the tough period since the Covid-19 outbreak.

“Cambridge United will strive to do everything we can to make these events as safe and successful as they possibly can be, so that we play our part in football supporters up and down the country being able to return to watch their own respective clubs.

“We have seen throughout this challenging time, the role and impact football clubs are able to have in so many people’s lives, and we’re proud to be at the forefront of the process to allow that to return.”

Clubs are working towards a potential return of a limited number of supporters at all grounds from the beginning of October, with Arsenal this week outlining plans to welcome fans back to the Emirates Stadium for the Premier League match against Sheffield United on October 3.