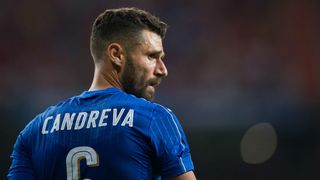 Antonio Candreva believes the criticism Italy received after their defeat in Spain was "excessive" as the Azzurri returned to winning ways against Israel.

Italy look certain to require a play-off to qualify for next year's World Cup in Russia, having fallen behind Spain in Group G following a one-sided 3-0 loss in Madrid.

But Ciro Immobile's sixth goal of the campaign ensured a 1-0 victory against Israel on Tuesday – all but securing a top-two place – and midfielder Candreva feels Italy deserve more respect for their work in the past year.

"We needed a victory, we got it and I thought it was a positive performance that was consistent with the work we've done in the last year," the Inter star said.

"Criticism is part of the job, but we are a solid group and some of it was excessive. I think the Azzurri have done good things this year.

"The defeat in Madrid was painful for us more than anyone - we were not expecting it and we have learned from our mistakes."

And team-mate Davide Zappacosta added that the Spain game offered Italy a reality check: "The game in Madrid made us realise many things.

"We have to be a compact side, to fight for every ball and harass every opponent.

"This sort of match [against Israel] is even more difficult as the opposition locks down all the space and make it hard for you."