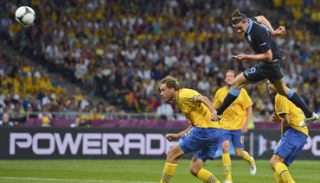 The 24-year-old, who has not been involved in the national setup since October's World Cup qualifier in Poland when he was an unused substitute, has recently scored four goals in six games for West Ham United where he is on loan from Liverpool.

"In a squad of players you need various qualities," Hodgson told a news conference after announcing a 22-man squad for the May 29 match against Ireland at Wembley and June 2 game in Rio de Janeiro.

"For a long time we didn't consider Andy Carroll because he was injured but since he's come back from injury he has been very much in our thoughts and he is the type of player who gives us another dimension."

As Hodgson prepared for life without newly retired defenders John Terry and Rio Ferdinand, he also needed to find a stand-in captain for these games in the absence of Steven Gerrard who has undergone shoulder surgery.

"[Frank] Lampard and [Wayne] Rooney are the sort of captains elect but I did mention to a group of journalists... that obviously I will speak to Ashley Cole, he's receiving his 100th cap," Hodgson said.

"Most players when they receive their 100 caps do get given the honour of captaining the country but the last time I spoke to Ashley about it he was more than happy to stay in the shadows rather than seek the limelight but out of courtesy of course I'll definitely speak to him again."

Hodgson was not concerned that Rooney's club situation might affect his commitment to England, saying the Manchester United striker's transfer request was between the player and club only.

"I'm sure I'm going to be dealing with a highly motivated player and a player who is more than ready physically and mentally to take on the challenge of these two games," the manager said.

There was a surprise call-up for 23-year-old Reading goalkeeper Alex McCarthy, who has played for the under-21s and takes his place in the squad alongside fellow keepers Joe Hart and Ben Foster.

Being in the group of 22 did not necessarily mean he would see any action, Hodgson said.

"I regard them more as preparation games than friendly games. It's important for us to prepare and as a result in this squad I have decided not to take one or two more senior players whom I know well and know exactly what they can do," he said.

"I'm more interested in this squad to give the players I think might be important for us in the [2014 World Cup] qualifiers in September and October a chance to really play and not to have a situation where in every game you are trying to use 18 players, people who instead of playing long periods are getting only a little 15 to 20-minute cameo."