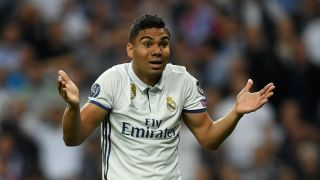 Casemiro believes Real Madrid can cope with the pressure of competing on twin fronts for the Champions League and LaLiga titles.

Zinedine Zidane's men host city rivals Atletico Madrid in the first leg of their Champions League semi-final on Tuesday, while they are level on points with Barcelona, with a game in hand, at the top of the Liga table.

Casemiro has become a key player under Zidane and the Brazilian said playing the first leg against Atletico at the Santiago Bernabeu will be a boost for his side.

"Real Madrid are used to [pressure] and we players are too," Casemiro told the UEFA website. "That's one of the core qualities at Real Madrid - you've got to be able to win all the time.

"The home factor will be massive for us in the first leg and it's vital we get a good result. When you see the fans supporting you even more passionately, arriving early to cheer you on the bus, it definitely gives you an extra boost.

"So I'd urge the fans to keep it up, because it's really important for us. Champions League semi-finals are always great spectacles and this one is going to be brilliant to watch. However, we'll show the opposition respect at all times, because we can't afford not to at this stage of the Champions League."

The 25-year-old has contributed two goals in his last three Madrid appearances and Casemiro wants be known as an all-round talent, rather than a defensively-minded midfielder.

"Nowadays midfielders definitely have to be complete players - you can't just be a destroyer, you have to build play too," Casemiro added.

"Of course I enjoy it when the fans applaud me for winning the ball. They show me a lot of love. However, you also have to be able to deliver good passes and get into shooting positions.