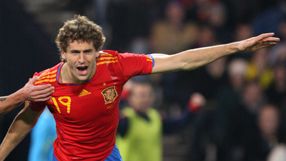 "He is a very complete player. Because of his physique he may bring things that others don't. In a tight game you can send a ball forward and he fights well for it, lays it on and holds the ball very well too," Casillas told a news conference on Tuesday.

"The most recent example was in the World Cup (second round game) against Portugal, when we couldn't find openings and he came in and changed the match," the keeper added.

Striker Llorente replaced Torres in the 58th minute in Cape Town and he disrupted Portugal, helping Spain increase the pace of their game and notch a 1-0 win through a David Villa goal.

"Since that match, he has progressed even more. That day he was very important for us and since then he has taken off and is now well regarded since has upped his game," coach Vicente Del Bosque said.

The Athletic Bilbao striker is the third top scorer in La Liga this season with eight goals, behind Lionel Messi on 10 and Cristiano Ronaldo on 11.

He has scored seven goals in 12 appearances for Spain and netted two against Lithuania and the winner against Scotland in Euro 2012 qualifying last month.

Llorente's form has attracted the interest of several top European clubs and Spanish sports daily AS on Tuesday linked him with a move to La Liga leaders Real Madrid.

Spain's main injury doubt apart from Torres is midfielder Xavi, who has been struggling with an Achilles problem this season and missed last month's internationals.

"Xavi is here well and in good spirits... but we have not fixed how many minutes he will play. In principle, if he can play 90 minutes, he will, but we will not do anything that can harm his fitness," Del Bosque said.

The friendly is being held as part of the effort to promote the joint bid by the two countries to host the 2018 World Cup. FIFA's decision is due on December 2.