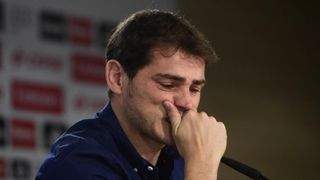 Porto-bound Iker Casillas struggled to contain his emotions as he said farewell to Real Madrid.

The goalkeeper's departure for Portugal was confirmed on Saturday, ending a 25-year association with the Santiago Bernabeu outfit.

However, while attempting to deliver a pre-prepared statement to gathered reporters on Sunday, Casillas was forced to pause on more than one occasion as he fought an ultimately unsuccessful battle to hold back the tears.

"Thank you for coming here and being with me in this special moment," he told reporters, who had afforded the 34-year-old a warm ovation when his emotions got the better of him.

"I've come to this great stadium today to say goodbye to all of you and especially the Madrid fans.

"As you know, as of yesterday, I am no longer a Real Madrid player and I will now be part of the Porto team.

"My move to Porto is because of many reasons. Firstly, the initial impressions I have got from the club and the manager.

"Secondly, since it's been known that I am going to Portugal, they've won me over, and I will do everything I can to fight hard to win titles."

Addressing his time at Real, Casillas continued: "It seems like yesterday that, at nine years old, I first pulled on the shirt of Madrid. I saw my dream come true.

"The club also formed me as a person and helped me grow. I tried to always carry their values.

"After 25 years wearing the shirt of the best team in the world, a difficult day has arrived in my sporting life - to say goodbye."

"A thousand thank yous. I will never forget. Remember, wherever I go, I will always shout 'Hala Madrid'.