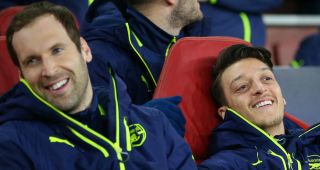 Mesut Ozil has the full backing of his Arsenal team-mates according to Petr Cech, who cooled reports of uncertainty over his own future at the club.

Having announced the end of his international career with Germany on Sunday, Ozil was part of Unai Emery’s squad who flew out for a pre-season tour to Singapore at the start of the week.

A meeting between Ozil and Turkish president Recep Tayyip Erdogan sparked controversy ahead of the World Cup and, in the wake of the nation's early elimination from the tournament, he received further criticism.

The 29-year-old hit out at the German Football Association (DFB) for failing to support him, saying in a series of statements published on social media that his treatment amounted to "racism".

Yet Cech insists Ozil is in good spirits in the Arsenal camp and backed the playmaker to be at his best in the 2018-19 season.

"He's training really well," Cech told reporters. "He's happy to be with us and we're happy to have him back as well because he is one of the key players in our team and we need him to be fit and ready for the season.

"He has been working really hard so hopefully he will be fit.

"He has the support from the team and we hope by the start of the season he will be fit and ready to perform for us."

Cech has also been in the media spotlight of late, with the experienced goalkeeper linked with a surprise return to former club Chelsea.

However, with Bernd Leno - a new recruit from Bayer Leverkusen - and David Ospina also in the Arsenal squad, Cech's only focus is on making sure he is first choice under new boss Emery.

"I have a contract with Arsenal," he said. "I am concentrating on this season, on the competition between the goalkeepers because we have plenty of options.

"I'm doing my best to show to the manager that I can be in the starting line-up when the season starts.

"That's my aim and as for the speculation, I don't really follow it."