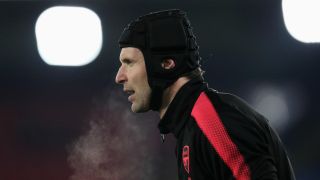 Petr Cech has told Arsenal they have to improve or risk failing to qualify for the Champions League for the second season in a row.

The Gunners finished fifth in the Premier League in 2016-17 and they are in danger of having to settle for Europa League action again as they sit sixth this time around, five points outside the top four.

Arsenal have only won one of their last four league games, although last week they beat Chelsea 2-1 to book a date with Manchester City in the EFL Cup final, and Cech called for his side to focus on the battle for the top four.

"We are a club that belongs in the Champions League," Cech said ahead of Tuesday's trip to Swansea City.

"You don't want to spend years outside of the Champions League spots.

"But every year the fight for the top four spots becomes harder and harder because the league is very competitive.

"Regardless of that, this season we have had so many games where we were not up to the standard we needed to be and this is something we need to address for the rest of the season.

"We should have far more points than we have at this moment."

"We know where we stand in the table. If we want to close the gap to Liverpool & Chelsea, we have to keep winning" - 's Petr Cech January 3, 2017

Cech's next clean sheet will be his 200th in the Premier League, but the 35-year-old does not believe he is coming towards the end of his career.

"I think being a goalkeeper you feel lonely all the time, but it is a special position on the pitch and that is why I love it," the former Chelsea man said.

"It is a big challenge and usually you are the one to blame for everything and the one who never takes the credit if someone scores a goal, but that is how it goes.

"I enjoy the challenge and I love being in that position where you make important saves, regardless of whether people notice or not, you know you have made an important save and you give yourself and your team a chance to win and it makes me happy.

"I am also proud because when I came to the Premier League in 2004 obviously I was 22 years old and I thought, 'Oh wow, this is everything I dreamt about and I am here'. It was up to me to show I was capable of playing in this league and obviously since I started it all went the direction I wanted and I always wished for.

"Obviously there were a few setbacks as you can imagine every time, but the most important thing is that I still enjoy the challenge of being a Premier League player and competing against everybody else.

"I have to say, sometimes when you look back and you speak about coming to 200 clean sheets in the Premier League, you see how many games everybody else needed to get there. Nobody ever got that far and you think, 'It is something amazing'. I hope it is going to go way longer than 200."