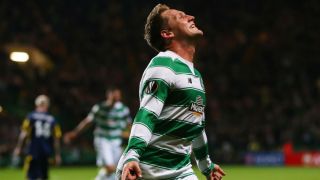 Celtic increased their advantage at the top of the Scottish Premiership to four points with a resounding 5-0 victory over a hapless Dundee United, Kris Commons hitting the headlines for the right reasons with a brace.

With second-placed Aberdeen drawing 1-1 at home to Motherwell on Saturday, Ronny Deila's men took the opportunity to widen the gap at the summit with Leigh Griffiths, Dedryck Boyata and Scott Brown adding to a double from Commons, who was forced to apologise for a verbal spat with the club's coaching staff during Thursday's Europa League defeat at Molde.

Celtic controlled the game from the outset and opened the scoring in the 23rd minute when Griffiths slid a shot past the Luis Zwick following Brown's incisive pass.

John Rankin fired over for United just before the half-hour mark and it proved costly when Boyata nodded in Celtic's second five minutes ahead of the interval.

Deila's side made it three in first-half stoppage time as Commons powered a penalty into the top corner following a foul on Kieran Tierney.

There was no let-up from Celtic in the second half, with Commons firing home again after his corner was not cleared adequately by the United defence.

Jozo Simunovic and Tomas Rogic went close but Brown capped the win with the fifth as his strike deflected into the back of the net to compound the misery for United, who remain rooted to the foot of the table with one win from 12.