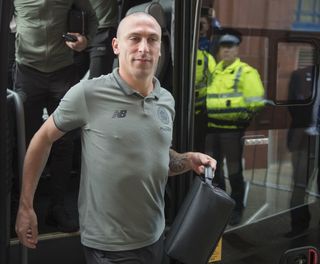 Scott Brown has praised the reaction of both Celtic and Rangers fans after he was subjected to a taunt over the death of his sister.

A 15-year-old boy was arrested and charged over an incident as Brown boarded the team bus following Celtic’s 2-0 win at Ibrox earlier this month.

Brown’s younger sister Fiona died from skin cancer in 2008 and the Celtic captain has previously been subjected to other similar comments.

But the 34-year-old was happy to receive an apology from Rangers amid other support and vowed to bounce back by focusing on his football.

“They (Rangers) sent an email, so that was lovely of them to actually do that,” said the midfielder, who was promoting a new sponsorship deal between energy form Utilita and Celtic Women’s team.

“Fans from both sides were phenomenal to be honest.

“It’s not just one incident, it’s happened over the last 12 years of my career. It’s hard, it’s sad and it shouldn’t be happening.

“I play football, I play to win. Ninety minutes, you can shout and swear at me as much as you want on the park but don’t go into detail off the park like that.

“For me that’s finished with. It’s about me focusing on football now and continuing winning games.

“People can just shout and say what they want and think it’s appropriate but for me it’s just about getting over that and focus on playing football again.

“It’s always difficult (not to react) but I don’t want to keep talking about that situation.”

Brown feels there is a simple reason for the growth in unacceptable abuse over the course of his career.

“That’s easy, social media,” he said. “Anyone can write what they want.

“Someone sitting in the house that has probably never played sport thinks they will drink a bottle of vodka and then go and write something online. It’s easy enough done.

“You are always going to get a bit of stick. For me it’s about how you bounce back. You block those people out, you focus on your football and you go out there and prove everyone wrong.”