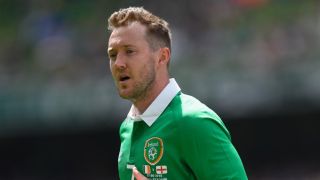 Celtic have ruled out making a January move for out-of-favour Everton winger Aiden McGeady, who made his name at the Scottish Premiership club.

The Republic of Ireland international, who started his professional career at Celtic before joining Spartak Moscow in 2010, signed for Everton from the Russian side in 2014 but has only made one League Cup appearance this season.

Manager Ronny Deila has previously said wage demands would prove to be a major stumbling block if his club tried to make a move and his assistant John Collins has now confirmed a transfer will not be possible.

"I would rule that out – yes," said Collins when asked about the prospect of the Scottish champions attempting to bring back McGeady. "I don't think it was realistic.

Speaking on Friday, Everton boss Roberto Martinez had confirmed he is open to allowing McGeady and his Ireland team-mate Darron Gibson to leave in January to boost their hopes of playing at Euro 2016.

He said: "We have had a lot of interest in Darron Gibson and Aiden McGeady and we need to sit down and consider what is the next step.

"It has been disappointing for them not to have enough minutes on the pitch and they need to be playing until the end of the season due to the opportunity of playing for Ireland in the Euros.

"They deserve to have special attention at this stage of the season. They have not played enough and now is a good opportunity to see if the second half of the season can be a good one."

Collins also confirmed Anthony Stokes will be allowed to leave Celtic on loan this month, while Romanian defender Andrei Peteleu, 23, and Norwegian midfielder Kristoffer Ajer, 17, have arrived for a trial period.