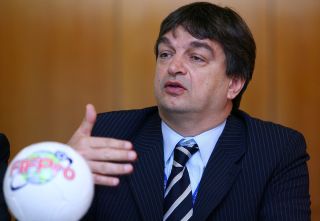 Champagne oversaw current president Sepp Blatter's successful re-election campaign in 2002 and was named deputy secretary for his efforts, but left FIFA after 11 years in 2010.

The 55-year-old Frenchman ended days of speculation on Monday by confirming an intention to put himself forward to become head of world football's governing body in next year's elections, although it remains to be seen whether or not he will be competing against Blatter.

Blatter has been FIFA president since 1998, but is yet to make public if he plans to run for re-election for a fifth term.

"In 11 years with FIFA I was fortunate to be close to many brilliant things that happened," said Champagne at a press conference in London.

"If we want to keep football universal, we need a different FIFA; a FIFA which can do more.

"We will continue what has been done well in the last 40 years, but it can only be done if FIFA is relevant to the new world."

Champagne believes a televised debate should take place between himself and the other presidential hopefuls to bring an openness to the whole process.

He added: "I would welcome a TV debate with anyone else who will stand.

"Football is so important for so many millions, let us show the world that we are open and democratic and transparent.

"The election next year is so important it will define football for the next 15 or 20 years so let us have a deep, meaningful discussion."

And Champagne's election campaign has already received a ringing endorsement from the legendary Pele, the only player to win the World Cup three times.

In an open letter on Champagne's official website, Pele wrote: "Football today enjoys a lot of success but also faces many problems requiring a strong and democratic FIFA with a vision in favour of everyone, and a governance, which is both universal and modern.

"FIFA must continue doing what has been done well in the past (taking its competitions and the World Cup to all countries and also continue its development programmes) but has to adapt itself to the 21st century and to the world of today.

"I cannot stay away from a debate which is so important for the future of football and thus, I support Jerome Champagne and his vision."