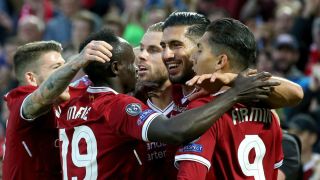 Emre Can scored twice as Liverpool cruised into the Champions League group stages, beating Hoffenheim 4-2 in their play-off second leg at Anfield to secure a 6-3 aggregate victory.

The Germany international scored twice in the opening 21 minutes of the game, either side of Mohamed Salah's close-range strike, and the home side were firmly in control of the tie at half-time despite Mark Uth pulling one back for Hoffenheim.

Roberto Firmino took full advantage of some poor defending by the visitors to make it 4-1 after 63 minutes, and Sandro Wagner's 79th-minute goal proved to be scant consolation as Julian Nagelsmann's side crashed out.

The attacking interplay between Sadio Mane, Firmino and Can will have pleased Liverpool manager Jurgen Klopp, but his side's defensive frailties were once again exposed as they made it six goals conceded in four competitive games this season.

There were no such problems at the back for CSKA Moscow, who ended Young Boys' hopes of qualifying for the group stage with a confident 2-0 second-leg victory, having won the first 1-0.

The Swiss side battled hard to stay in the tie but were broken by Georgy Schennikov's goal from the edge of the six-yard box in first-half stoppage time. Alan Dzagoev made it 2-0 on the night when he converted Vitinho's cross with a clinical left-footed strike.

Steaua Bucharest went into their second-leg tie with every reason to be confident, having held Sporting CP to a 0-0 draw in Portugal, but found themselves 1-0 down when Seydou Doumbia scored for the visitors after 13 minutes.

Junior Morais levelled matters seven minutes later and it stayed 1-1 until half-time, but Jorge Jesus' men ran riot after the break, with Marcos Acuna, Gelson Martins, Bas Dost and Rodrigo Battaglia all finding the net as Sporting romped through 5-1.

Qarabag qualified for the Champions League group stage for the first time in their history with an away goals victory over Copenhagen.

The Azerbaijani side led the tie 1-0 going into the second leg and Dino Ndlovu scored the vital away goal between strikes from Federico Santander and Andrija Pavlovic for the home side as Qarabag secured progress to the competition proper at the fourth attempt.

Elsewhere, Slavia Prague failed to overturn a 2-0 deficit in their second leg against APOEL, the Cypriot side holding firm at Eden Arena to clinch a 0-0 draw and victory in the tie.